Adina Hulubaș:
​A View on Active Construction Rites from Romania

Traditional communities in Romania managed to preserve strong beliefs in genius loci and the harm caused by a new building. Construction rites appear as concentric circles, starting with divinatory acts that check the energy of the space, offerings laid on the ground, religious service (which seems to be a more recent practice), and continuing with sacrifices performed on the threshold of the house. Nevertheless, Romanian cities are mostly populated with villagers looking for a better life; therefore relevant data is also collected from urban settlements.
​Human sacrifices have been substituted with the rite of immuring someone’s shadow and collective memory still indicates that a sudden death follows shortly after. In order to avoid these tragedies, people started slaying animals on the foundation, since the general conviction says that “A new house demands a head”. People who infringe this traditional rule expect the worst and any event is decoded accordingly.
Objects that are buried inside walls and in the hearth range from heads of domestic birds, food offerings, money, and Christian elements (wooden crosses, rosaries, bottles with holy water etc.). One more magical protection is assured by architectural details intended to ward-off the evil that might enter through the top or the corner of the roof.
The data provided is part of The Folklore Archive from Moldova and Bucovina, hosted by The Romanian Academy, Iaşi Branch and it contains information collected from 1970 to the day. Comparisons with similar building sacrifices from various countries will argue that magic protection of the house represents a significant cultural pattern.
​ 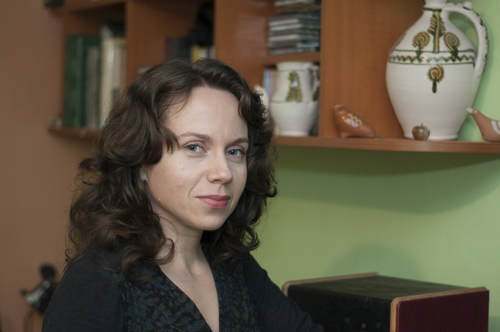 Adina is a researcher into folklore and ethnography, with a particular interest in traditional architecture from Romania. She published three books on childbirth beliefs and initiation rites and several articles on intangible culture, urban anthropology and folklore. She leads the Department of Ethnology from The ”A. Philippide” Institute of Romanian Philology, The Romanian Academy, Iași Branch.
Apotropaios - on the web since 1999
brian@apotropaios.co.uk