This inventory of folk magic finds in Dorset has been compiled by Jeremy Harte and kindly donated to the public via this website. The list contains many good examples of folk magic artefacts. If you can add to this list both Jeremy and myself would love to hear from you. 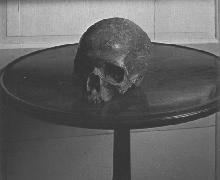 Skull kept on beam in the attic, near the chimney

‘In May 1963…the mummified body of a cat…was found standing on a ledge about six feet from the floor, sandwiched between a lath-and-plaster partition and a brick wall. Only a few inches away was a volume of prose and poetry published in 1851. This was entitled The Speaker with the explanation that it contained ‘miscellaneous pieces selected from the best English writers, with a view to facilitating the improvement of youth in reading and speaking’. Inside the cover was an inscription: ‘John Chaffey, from his sincere friend and well-wisher James Hunt, 3 Victoria Terrace, Swanage, Oct.12/63’.

Shoe found on top of wall under barn roof

Thatched cottage near to village school. Dried cat found when roof was extended in the 1980s. Correspondent said, "It had been damaged by the builders but appeared to me to have been dried in a sitting position. It was put in the skip but I replaced it in the roof so it’s still hopefully doing its work."

Shoes found bricked up in cottage

Shoe found on top of wall under thatch 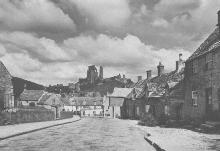 ‘When I lived at Lyddon House some twenty years ago, a very old cottage adjoining was pulled down. The building was largely of rubble and one of the men engaged in the task of demolition, found embedded in a wall, the hoof of an ox shod with a miniature horse shoe, which he gave to me. I wondered why the hoof was shod, and why it was in the wall, and eventually took it to the late Colonel Drew at Dorchester Museum. He told me that cattle were often driven long distances in olden times and were sometimes shod to protect their hoofs from the roads. Colonel Drew also said that the presence of the hoof in the building arose from an old belief that if it was put in the wall it would keep off witches and bad luck. So here was an interesting survival of an ancient superstition. I gave the hoof to Colonel Drew and it is probably still in the Museum’ - letter from the Revd. A.C. Esau, c1965, in Dorset Record Office: PE/HAZ:IN2/1.
_________________________________________________________________________﻿ 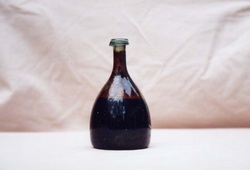 Boundary wall with Worth Matravers 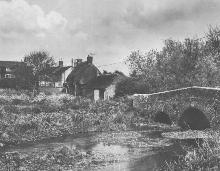 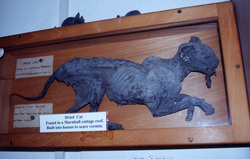 House of William Mitchell the blacksmith

‘Joe Bollard.. he come’d down and took’d a drop o’ ale wi’ we, an’ he talked a good bit about the cow, and said as he knowed ther were summat more than common about thic cow… He twold we thet he had a cow once as were sarved just the same way, it were a wold cow hisn, and a’ter a bit the poor beäst died, and a’ter she were dead, when ‘er were skinned and cut up and all that, they took his heart and stuck eleven pins into un, and burned un, and a’ter he were burned they sweep’d and drave’d it all up in the ashes. But next morning ‘twere all abroad over the floor again. Ees, and they that hurted the poor wold beäst were took bad and died.
‘Zoo it went on…and the cow died, and the same morning I seed Joe Ballard… I gathered a lot o’ firewood in the back-house chimley and I made the nails, as I’ve made many for such work. And Joe, he’d been in and skinned the beäst and took out the heart and show’d it up to winder to I, and put it up in loft ‘cause er mustn’t never touch ground. And I went and bound the heart wi’ wire to the two nails I’d a made, and hanged en up in chimley, and darkened up the winders wi’ sackbags as nobody shouldn’t see in. But we couldn’t foller on wi’ nothing till ‘twere 9 o’clock, ‘cause the moon were late o’ getting up, an’ us was bound to wait the right time.
‘Mother and Joe come into the kitchen. Mother she sot a reäding of a newspaper into chimley corner, but I couldn’t seem to have nothing to doin’ wi’ it. So I went on to bed and got to sleep, I were that tired.
‘I ‘bid abed mid abin a couple or dree hours, then I got up and went down to see how all were agoing on. When I got there all were quiet enough, the vire were burning up under the heart, wasn’t a soul about, and the ‘leven pins was in the heart sure enough.
‘I was just going off again when my missus she zed: ‘Drat if ee shall, Bill, afore thic heart do burn’; and I swore a woath as sooner nor that fire should go out afore thic heart were burned, I’d beät up our clock, I ‘ould, to make fuel…
‘So I sot down again in front o’ the fire, when all on a suddent like, there busted a spout o’ blood out o’ the heart sort o’ sideways, right out on the kitchen floor, and ‘fore we had time to spake a word the awfullest screeches and noises that ever anybody did hear, just outside our front door. And fust the door did sheck, and then the winders did rattle, just as if they was going to be droved in.
‘We had sackbags up to winder so nobody couldn’t look in, so I croped up stair and looked out o’ chamber winder. Well! Blowed if there werdn’ thic Mrs. Hart!…’ - H. Colley March, ‘Dorset folklore collected in 1897: I’, Folk-Lore 10 (1899) pp478-489: p483.
________________________________________________________________________
Piddletrenthide, near Dorchester

‘According to Mr. R.A. Healey, of British Damp Proofing, Beaminster, who uncovered the effigy while working at the cottage, these were a common addition to buildings for centuries and were meant to ward off evil spirits.
‘The cottage was last occupied by a 90-year-old member of the Cox family who died recently and it is now owned by his nephew, Mr. Bert Male, and his wife who live in the Midlands, but will make the cottage their home after renovations…
‘It is believed to have been built at the end of the 17th century and has been added to over the years. The effigy was found embedded in the wall of the original scullery…
‘The effigy, an ugly fellow with empty eye sockets, a squat nose and a little round hole of a mouth into which the workmen stuck a cigarette to lighten his gruesome appearance, will remain exposed to become part of the décor of the room’ - Dorset Evening Echo 22 Dec.1987.
_________________________________________________________________________
﻿Portland

House at the Verne 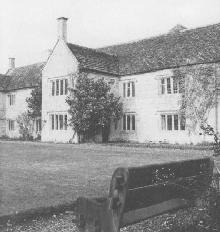 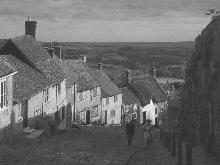 Shoe found in roof by chimney, with khaki puttee of Boer or First World War

Cottage below the churchyard

House near the Stocks Inn

Shoe found under floorboards in first floor bedroom, near chimney

‘The architect who planned the alteration of this house told me there were hundreds of bottles hidden in chimneys in Dorset. This has also been corroborated by our ancient chimney-sweep. In a farm-house in the neighbourhood a bottle was found hanging by a wire up in the old chimney; and, when it was cut down, was found to contain liquid. It was tightly corked and the cork stuck all over with pins. After the bottle was broken and the liquid spilled the family had nothing but bad luck and finally left the place. The bottle is supposed to prevent bad spirits entering the house’ - Marianne Dacombe, Dorset Up Along and Down Along (Bridport 1935) p110.
_______________________________________________________________
﻿Winterborne Stickland, near Blandford Forum

‘A local man…was a house repairer and in tinkering with an inside wall he broke through into a hidden space that had been built up, and there was the pot. He described that pot and it must have been a delightful thing in itself; tall and of goodly proportions, it was probably an interesting relic of old. It stood in the space all alone as if it had been placed there with care and not just left as forgotten rubbish and the finder said he knew he had found the pot of gold, and the shock was too much, he swayed on his feet and fainted under the stress. When he recovered he opened it up and it was full to the top with old pieces of iron, like old shut-links and things that any countryman might gather in a lifetime. There was no gold and there is a possibility that someone long before had walled it in with a joke in view’ - Eric Benfield, Dorset (Robert Hale, 1950) p85.
_________________________________________________________
﻿Wyke Regis, near Weymouth

Caveat: proper formatting of text was not possible for this web-page. The original document contained perfect grammar and punctuation! Blame Brian Hoggard!

The research on this page is copyright of Jeremy Harte (except where otherwise indicated) and permission must be sought before any copying, publishing or other media distribution of this article is undertaken.