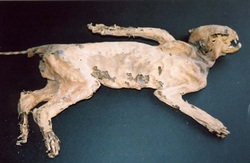 This example was discovered in a thatch in Eckington, Worcestershire.
There are well over a hundred dried, or mummified, cats on record at present - although there are anecdotal records for probably over ten times that amount. The most common places to find these poor creatures is in walls, under floors and sometimes in roof spaces.

​There are, of course, examples where it is difficult to tell if the animal was purposely concealed or whether it merely crawled away to die. A sad case is from Worcester where a mummified cat and kittens were found below floorboards at the Reindeer Inn (now part of a shopping arcade). It seems likely, though not certain, that the cat had crawled into a cavity to give birth and had become trapped with her kittens and slowly died. However, when a cat is found concealed in a lath and plaster wall, or bricked into a cavity then it is usually somewhat easier to find out whether it was put there with intent.﻿ 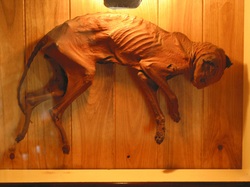 This cat is on display in the bar at the Red Cat Hotel in Norfolk - published here by kind permission of the owner.
﻿After death, whether natural or through killing, some of these cats have been positioned to look like they’re in the hunt. Some writers have suggested that they were set up to act as vermin scarers but their locations, between cavity walls, in roofs and even beneath window sills seems to be too obscure. This fact lends some credence to the possibility that the cats were placed there to act as vermin scarers on a more spiritual plane.﻿

Folklore tells us that cats were regarded as being particularly gifted with a sixth sense. Perhaps it was hoped that the family cat, who served so well in life, could exercise its hunting prowess and psychic abilities in the afterlife too. An alternative explanation is that it could have been a way of warding off the witch’s familiars, who might creep around on errands intending to cause harm. 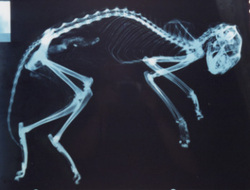 X-ray of the cat from the Red Cat Hotel, Norfolk.
﻿Dried cats in buildings are extremely common, though not, perhaps, as common as concealed shoes. They are perhaps the least likely of all the finds to be properly recorded because of the unpleasant reactions which they provoke in people when they are discovered. They usually end up in the builders' skip but at least one correspondent had a dried cat burned, in the hope that this might free the animal's spirit.﻿

These cats obviously weren't dried when they were concealed and it strikes me that this would have been a fairly significant act on the concealer's behalf. Clearly there was some strong notion that concealing the animal would serve a purpose, which was almost certainly some kind of protective magic - whether as a 'foundation sacrifice' or as a form of pre-emptive counter-magic. With more examples on record their precise meaning may become clearer.
Recommended reading: