Linda Wilson:
By Midnight, By Moonlight - Ritual Protection marks in caves beneath the Mendip Hills, Somerset

In 2003, marks found in Goatchurch Cavern, Somerset, were identified as ritual protection marks. Three finely-incised W marks of the type Timothy Easton has associated with the Virgin Mary, thought to represent conjoined Vs, were found in the vicinity of a steeply-descending, chimney-like tube known as the Giants’ Steps, from which a noticeable draught issues.

In 2007, more such marks were found in Wookey Hole, a cave with a long association with witchcraft. In another chimney-like feature, The Witch’s Chimney, there is a much larger collection of ritual protection marks of various types, including the ‘butterfly cross’ symbol, often been associated with masons’ or carpenters’ marks, but a cave context they can have no such practical significance. Ritual protection marks were also found in Long Hole in Cheddar Gorge, including a conjoined V incorporating a P on one side, strikingly similar to a mark from The Swan, Worlingworth.

A poem written in 1810 by James Jennings provides a link between the caves in Wookey Hole and Cheddar Gorge and gives a possible glimpse into local folk magic practices concerning the banishment of spirits from dwellings, sending them from Wookey Hole to the Cheddar cliffs and finally to the Red Sea.
​ 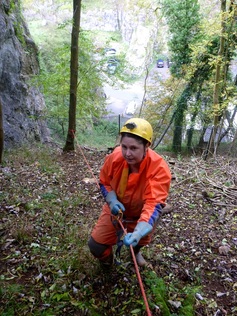 Linda climbing up to Long Hole, Cheddar Gorge.
Linda Wilson started caving with the University of Bristol Spelaeological Society in 1979. This led to a life long interest in caves, mines and underground spaces. For the last 25 years she has pursued cave art as a speciality, visiting a great number of sites in France and elsewhere, including many that are closed to the general pubic. She began studying ritual protection marks in 2003, after the discovery of such marks in a cave under the Mendip Hills. This area of research combines well with other longstanding interests of hers such as folklore and the history of magical practices.
Apotropaios - on the web since 1999
brian@apotropaios.co.uk