﻿It doesn’t sound as exciting as concealed cats or horse skulls but concealed shoes are a highly significant find, and by far the most common with over 2000 examples recorded so far. Many people who have discovered shoes in buildings feel very strongly about not removing or even discussing them. It is important, therefore, to treat individual feelings about these items sensitively.
​
June Swann pioneered research into concealed shoes with an article in 1969 for the Journal of Northampton Museum and Art Gallery (click here to see a 1996 version of this article) - this museum holds a very large collection of concealed shoes. I must thank June Swann for her kind assistance in the preparation of this page.

The earliest reference to the use of shoes as some kind of spirit trap comes from the 14th century. It regards one of England’s unofficial saints, John Schorn from Buckinghamshire, who was rector of North Marston 1290-1314. His claim to fame is that he is reputed to have performed the remarkable feat of casting the devil into a boot. The oldest concealed shoes date back to roughly the same time as Schorn but there are very few examples from that period - he may have begun the tradition, or it may simply be that his legend records a pre-existing practice.

26.2% of shoes are found in chimneys, usually on a ledge within the chimney. Shoes can be discovered in large groups and sometimes with other artifacts. 11.3% are pairs of shoes - most are odd. 40% of shoes belonged to children.﻿ 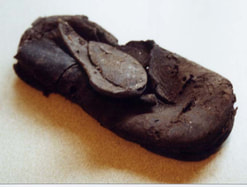 This shoe was discovered with an old book behind plaster in the roof of a cottage in Salford Priors, Warwickshire.
﻿The shoe was not a cheap item, it may have been one of the most expensive purchases a family had to make. Therefore shoes were repaired as much as possible before being discarded. Clearly, by the time the shoe was discarded it provided a unique record of the wearers individual foot. Here we may have a similar principal to the witch-bottle, fooling the witch/spirit that the person is there in the chimney. It was probably hoped the shoe would trap the spirit or act as a decoy of some sort. The location of shoes, often either within or near to the hearth, does suggest some kind of protective function.﻿
There are some specific points to record in the case of shoes. According to June Swann, the author of the excellent article on this site, the location of the find in relation to north in the building should be recorded, along with how many lace holes they have, whether (in your opinion) it was a man's, woman's, boy's, girl's, child's shoe and the date of the find also. As with all finds, it is important to attempt to ascertain the date of the building.

Garments have also been found concealed in buildings and may have a similar significance in that they are 'valuable' rubbish. They too have highly important personal significance and may be a similar practice to that of concealed shoes. There is a website all about Concealed Garments visible by clicking here. Tehmina Bhote and Charlotte Dew developed the web resources for the project and conducted extensive research into recording and understanding garments finds for this site.