It is becoming apparent that the phenomenon of concealed objects in buildings has been known all over Europe and beyond. In some areas these have been studied thoroughly enough that comparisons on regional traditions are possible. In this paper a short survey on similarities and differences between finds in the UK and Finland is presented. The source materials, methodology, and results of the author’s forthcoming PhD-thesis concerning concealed objects in Finland during historical times (c. AD 1200–1950) are also shortly introduced.
Some objects occur both in Finland and the UK, for example horse skulls, coins, and sharp metal artefacts. Concealed cats and shoes that are common on the British Isles occur only sporadically in Finland and some phenomena, such as witch bottles, may have been completely unknown. Instead other fascinating concealed objects are present: perhaps the most intriguing example is frogs inside miniature coffins. The methodology used to study the Finnish traditions is a contextual multi-source approach, where folklore accounts and witchcraft trial records are utilized alongside material finds in order to construct a wide understanding of these practices.
​ 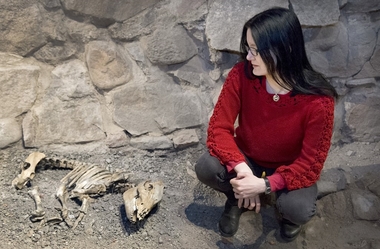 Sonja Hukantaival
Sonja Hukantaival is the expert on ritual building concealments in Finland. She will defend her doctoral thesis on the subject at the University of Turku Department of Archaeology in spring 2016. I addition to building concealments Hukantaival specialises in the archaeology of folk religion, ritual, and magic more generally. She has for example studied the fascinating Finnish counter-witchcraft rituals that involved frogs buried in miniature coffins. Hukantaival is currently planning a post-doc project concerning the materiality of Finnish folk magic.
Apotropaios - on the web since 1999