The practice of concealing witch-bottles appears to have started in the mid seventeenth century. Almost invariably in the 17th and into the 18th centuries a stoneware bottle colloquially known as the ‘bellarmine’ was used. It got its name from a Cardinal called Bellarmine who published much anti-Protestant literature. These bottles are pot bellied and have masks stuck onto them of a grim looking bearded man. The bottles are mostly German and are known as bartmann stoneware.﻿ 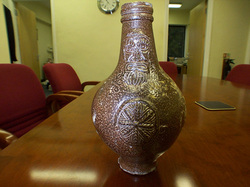 ﻿This bellarmine witch-bottle was discovered beneath the hearth in an old cottage in Felmersham, Bedfordshire in 2001. It contained hair, pins, and it tested positively for urine. Contents analysed by Dr Alan Massey.
Half of all witch-bottles are found focused around the hearth, a quarter beneath thresholds, the remainder mostly beneath the floor and in walls. Of around 250 English witch-bottles on record, 130 are ‘bellarmines’. The contents of these bottles are fascinating and constitute a counter-spell against witchcraft. Of the contents which are identifiable, by far the most common was iron pins or nails (95%). The second most common was human hair (25%). Another ingredient which is very difficult to test for if the bottle has leaked at any point is urine. Roughly 25% of those with contents have been tested for the presence of urine and all proved positive. So, we have iron, urine and hair as the most common ingredients. Other ingredients such as small bones, thorns, pieces of wood and, in a few cases, pieces of fabric cut into the shape of a heart are sometimes found.﻿​ 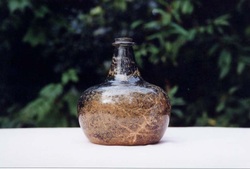 ﻿This bottle was found in Reigate, Surrey and is thought to have been deposited somewhere between 1700-1750. It was discovered corked containing liquid and nine bent pins in a disturbance adjacent to the chalk floor of a 17th century building being excavated in London Road. Dr Alan Massey published his analysis of the contents in ‘The Reigate Witch-Bottle’, Current Archaeology, no 169, 2000, pp34-6.

The locations in which these bottles are found is significant. There is an emphasis on placing these objects at entry and exit points of the building. The hearth was and is always open to the sky and represented a major security worry where supernatural entities were concerned. The doorway was naturally the other place that would need protecting as it would be opened and closed at regular intervals day or night. The use of iron pins in the bottles is significant as it had always been regarded as a magical metal which is abhorrent to witches and fairies.﻿​

The effort which went into concealing these bottles was large. How fearful of supernatural intrusion into your home would you have to be before you'd consider lifting your hearthstone, digging a hole and inserting a bottle filled with pins and urine?