So far I have records of about 30 of these from throughout England and Wales. No finds have yet emerged for Scotland and Northern Ireland. However, owing to their fragility, it is no surprise that not many of them have survived through to today. It is probable that many hundreds of charms remain to be discovered from the last couple of centuries.

Written charms are the result of a farmer or householder’s need to have their property or livestock protected by a supernatural spell. The person in need would contact the local cunning-person and ask him/her for a charm to protect the desired creatures or buildings. The charms themselves are little masterpieces to look at. They frequently contain astrological symbols and contain a mixture of old Latin bible related text and a kind of invocation to God or some greater power to protect the required items.  The one below is a typical example from Wales.  Several virtually identical ones have been found all apparently written by the same cunning-man.  Note the Abracadabra word triangle bottom left, series of astrological characters bottom middle and the occult sigil bottom right which was lifted from a grimoire. 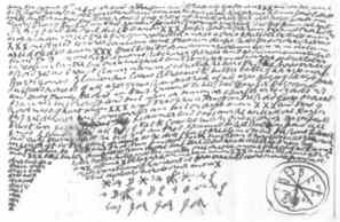 "Lord Jesus Christ be the preserver of William Pentrynant his cows, calves, milk, butter, cattle of all ages, mares, suckers, horses, of all ages yews, lambs, sheep of all ages, pigs, sows and prosper him on this farm to live luckily saved from all witchcraft and evil men or women spirits or wizards or hardness of heart amen." [from Merrifield, The Archaeology of Ritual and Magic, 1987, Batsford, p151].  Ralph Merrifield investigated this charm which was found buried in a cowshed in Sarn in Wales. When dismantling an old trough a cylindrical stoneware bottle was found beneath which had been broken during the work and a paper charm was discovered inside.
The preoccupation with evil spirits causing harm is obvious here. People perceived a power in the Latin rituals of the old Catholic church which explains their presence in the charms but clearly astrological symbols and the word-triangle of abracadabracadabra (in the above example) were seen as equally powerful.

There are also many examples of written curses. A particularly well known curse was made on the unfortunate Sarah Ellis - her name was spelled backwards on the curse.