Before describing marks for protection it is important to be aware that carpenter's and mason's marks are also often found in historic buildings. Carpenter's marks were used extensively as part of the assembly process for erecting timber framed buildings. The marks usually form a numerical sequence which helped the builder to know which timbers to join together and in what order when they were laying out the frames which would then be erected. Mason's marks usually exist to show which stonemason worked on which piece of stone and was part of a system for checking quality of work and ensuring proper payment. In addition to these marks we often also find merchant's marks on stone and timber which can resemble occult sigils at times. On timber we can sometimes also find marks associated with a timber yard or shipping process. There are a wide variety of marks on buildings which were put there for utilitarian reasons, it's important to be aware of that when recording any marks you find. 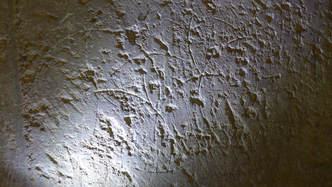 This example of a overlapping daisy-wheels (look carefully) was found within the porch of All Saints Church, Evesham, Worcestershire.
﻿Several types of symbols can be found engraved onto wood, stone or plaster for protection purposes. One of the most commonly encountered of these is the ‘daisywheel’. It is a compass-drawn circle with six petals within it and it appears on buildings and on furniture throughout Britain. They seem to have originated as a solar symbol which could dispel darkness. These 'daisy wheels' can be found throughout the world.

Protection marks are usually very lightly etched or scored onto surfaces, sometimes so lightly that they are invisible unless a bright light is aimed obliquely along a beam. When the marks are in areas of a building that are difficult to reach, it seems that they were sometimes made by the carpenters or builders prior to the erection of the building. There are also, however, many examples which appear to have been done after the building was erected. 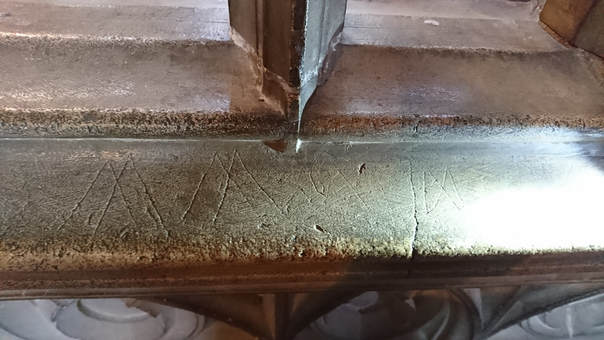 An example of Marian marks and a butterfly mark from inside Prince Arthur's Chantry in Worcester Cathedral.
There is a category of marks known as 'Marian' marks because they relate to the Virgin Mary. Where we get overlapping V's and the letter M we can be fairly confident that these refer to the initials of the Virgin. Worship of her was a very important part of pre-Reformation religion and it did not completely die away post-Reformation. It would seem that these marks are an invocation to the Virgin that she may protect the location in question.
Deliberate burn marks are also often found.  These are made by holding a flame against a timber and repeatedly scraping away the carbon layer which forms to make a deep flame shaped mark.  They are particularly common on chimney lintels but can be found literally anywhere on timbers.  Some people researching in this field call them 'taper burns' but I would caution against using that term as any small naked flame, such as a candle, could be used to make these marks - deliberate burn marks is fine.  This example is from the fireplace at Little Hall, Lavenham. 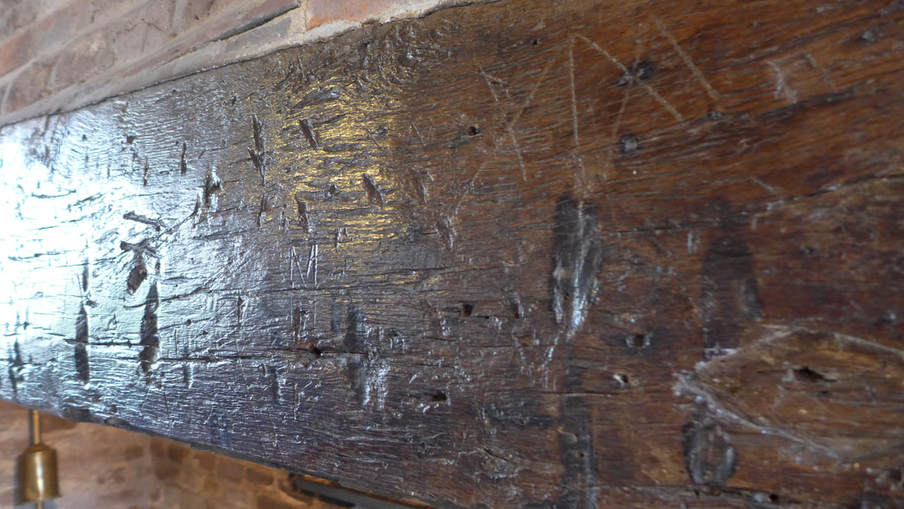 Some good examples of marks were discovered in a house in the USA - find out more here.

Terminology. I use the term protection marks to describe these marks. You will see other people using two other terms to describe them:
Ritual Protection Marks - I find myself wanting to know what ritual people are referring to. I don't think the use of that word helps.
'Witch-marks' - this term I really do not enjoy. Although these marks formed part of array of methods people could use in protection against witchcraft, that is not how they all originated. Using this term ignores the individual stories of how these marks came to be and infers they are all a product of era of the witch-trials which is not the case.

Here's a video of a lecture I gave to members of staff at the Churches Conservation Trust recently:
Recommended reading:

If you click here you can view a summary of an article about some marks found in Goatchurch Cavern, North Somerset.
Apotropaios - on the web since 1999
brian@apotropaios.co.uk